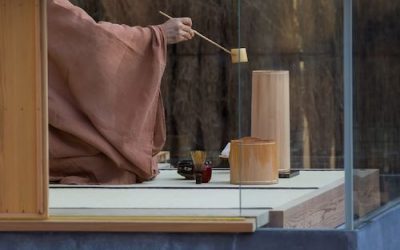 The “Glass Tea House Mondrian” by Hiroshi Sugimoto is inspired by pre-modern abstraction, as perfected by Sen no Rikyû, in the Japanese tradition of the tea ceremony, “I decided that a Japanese transliteration of the name “Mondrian” would be an ideal name. I combined three characters – – that betoken “a modest house where one can hear the birds sing.” I like to think that this tea house was designed by Mondrian after he heard Sen no Rikyû speaking to him through the singing of the birds”, says Sugimoto.

The Pavilion consists of two main elements, an open-air landscape courtyard and an enclosed glass cube. The landscape courtyard (40m long and 12.5m wide) follows a path along a reflecting pool leading the visitor to a glass cube (2.5m x 2.5m), inside which the traditional Japanese tea ceremony will be performed. The glass cube will host two visitors at a time together with the master of the tea ceremony, while the other spectators – up to 30 max – can watch and take part in the ceremony around the sides of the glass cube.

Inspired by the Ise-shrine, the exterior fence around the pavilion is made entirely of cedar wood and realized through a contribution by Sumitomo Forestry. Hiroshi Sugimoto and Sumitomo Forestry chose the cedar wood from the Tōhoku region for their commitment in helping to reconstruct areas which were devastated by the 2011 Tōhoku earthquake and tsunami.

The long reflecting pool made of the glass mosaics at the centre of the landscape court- yard represents the other main feature of the installation; it leads the visitor to the key area of the pavilion, i.e. the glass tea house.

Technical know-how and handcraft traditions are combined in the construction of the glass cube, and of the wooden elements, bringing together history and modernity, craftsmanship and technology. The glass cube is made by Asahi Building-Wall, a leading company in the production of architectural glass structures and engineering solutions for glass facades or structural building elements.

The tea utensils used for the performance of the tea ceremony are designed by Hiroshi Sugimoto and produced by craftsmen in Kyoto.

Having followed the planning and building works of the project since its very beginnings, it soon became apparent that Sugimoto was building a house. For a start, there were architectural plans, drawn at his architect studio in Tokyo. In carrying out such plans, shallow foundations were built, plumbing and drains for the water constructed, electrical cables laid, and calculations made by a structural engineer to make sure that the walls would resist the Venice winds.

There is an entrance gate, a central construction made out of glass, a path, a wall and landscaped grounds all around it. The central construction, standing on metal stilts inside a large water piece, reminds one very much of the many islands that make up Venice – like a miniature version of our city: a house surrounded by water.

Spending many days with Sugimoto on the building site made me think that what I was seeing, however, was not really the building of a house: it was more like watching an artist creating a free-standing sculpture, by continuously adding and removing volume. Many different materials were used: glass, metal, cedar wood, cement, bamboo and stones. The artist spent many hours shaping every path, by choosing large and small stones, one by one, creating certain shapes and volumes. Like a sculptor, Sugimoto dictated how exactly the bamboo canes were held together to form a roof over the benches – he decided on the length of the canes, as on the distance between them – so as to determine how much light would come through, in a play of light and dark. Sugimoto knows exactly how each piece should relate to the rest: the heights, the volumes, the depths. Shapes and volumes are thus formed like in a sculpture.

But when the artist directed the workmen on where to put the stones down on the pre- pared sand surface, he was really behaving like a painter: some stones are darker in tone, some lighter, and their shades form a harmonious painterly design – a complex abstract composition. Some surfaces are smooth, other rough, and remind us immediately of thick paint on a canvas or of a complex collage. Different planes rise from the ground through flat, two-dimensional wood surfaces. Some stand alone independent of others – some form right angles, or intersect, or give the illusion of great depth, as the lines of classical perspective in a painting. Great importance is given to certain vistas, as the artist leads the visitor from one to the next, like in a viewing of paintings in a gallery.

Sugimoto’s “Glass Tea House” combines all of these practices, in dogged pursuit of beauty and absolute harmony, whatever the medium.

Next
NATHALIE HAMBRO
HOW TO ACADEMY
Cancel Reply