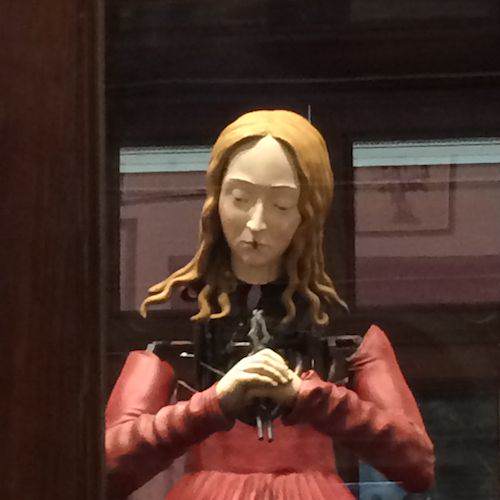 Landy’s imagination has been captured by images of saints in the collection; the colourful and detailed portrayal of their lives, their attributes, and stories of their single-mindedness and strength have provided powerful stimuli for Landy’s work. Towering over visitors, the seven large-scale sculptures swivel and turn, in movements that evoke the drama of each saint’s life. Saints Apollonia, Catherine, Francis, Jerome, Thomas – and an additional sculpture that takes a number of saints as its inspiration – fill the Sunley Room alongside collages on paper that show the creative process on which Landy embarked to arrive at the kinetic sculptures.

The large-scale sculptures are formed of re-imagined fragments of National Gallery paintings cast in fibreglass, painted and assembled with the surprising addition of metal cogs, wheels, defunct fan belts and motors that Landy has accumulated from junkyards, car boot sales and flea markets. Landy has reworked the two-dimensional images into energetic three-dimensional pieces, creating elements hidden from view in the original paintings, such as a saint’s back or the fullness of folds of drapery. Keen to involve visitors and to facilitate interaction with the works, Landy has devised foot pedal mechanisms that crank the works to life.

Landy was particularly attracted to works by artists of the early Renaissance displayed in the Gallery’s Sainsbury Wing, including Carlo Crivelli, Saint Jerome (about 1476); Lucas Cranach the Elder, Saints Genevieve and Apollonia (1506); Sassetta, The Stigmatisation of Saint Francis (1437–44); and Cosimo Tura, Saint Jerome (probably about 1470). The show includes a three-metre-diameter fibreglass interactive wheel installation in response to a work by Pintoricchio: Saint Catherine of Alexandria with a Donor (probably about 1480–1500). Visitors can spin the wheel, the symbol associated with Saint Catherine, to reveal episodes of the saint’s life as they pass among the sculptures or view the large collage created with fragments of wheel images reproduced from paintings in the collection.